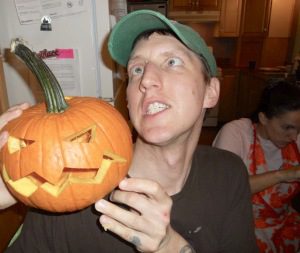 Many people ask me why I moved to Muskegon, Michigan from Houston, TX where the economy is strong and there is a life to be had. My honest answer is I met a guy on the internet. Yes, I sound like a love addict when I say these things. And I feel somewhat embarrassed admitting the truth.

I met my boyfriend on the internet when I lived in Texas. I was actually starting to get a long being single just fine when he popped into my life. I got an email one day from a dating webpage I actually forgot that I signed up for called veganpassions.com. He sent a message saying I know you are long distance but since we are both vegan and in recovery from alcoholism I thought it would be nice to be email pals. I thought, “Okay, it would be nice to have a long distance friend that had such big things in common with me.” He did not have a photo but he had a description that sounded kinda hot to me. It read 6’4″, dark hair,buzz cut, light eyes, tattoos. That’s all I had to go on. We wrote emails for about 2 months about being vegan, our spiritual beliefs, our sad relationship sagas, books we loved and who we were in general until I finally asked for a photo. I think for once I got to know someone for who they were first instead of just wanting to get them into bed.

After about 3 months I invited him to visit me in Houston. I will have to admit it was a big risk to have someone you never met in person come stay at your house for a week. If I didn’t like him I was stuck with an uncomfortable guest at my house for a whole week. Or I would have had to face telling someone I did not like them and send him home. It turned out I did like him and it was an amazing encounter of connecting with someone on some really profound cool levels. He turned out to be an amazing generous and kind man but with a little edge to him to keep it somewhat exciting and enticing. But, then he had to go back to Michigan.

The next step was me visiting him in his town. That went really well too. And then next I knew I planned to go stay with him for a couple months during the summer. I had a job where I could work from my computer anywhere except October through January. So a long distance relationship started. I spent two years in this relationship driving back and forth between Texas and Michigan. There would be months where we did not see each other. In the end it started to take its toll.

Around last fall when it had been about 2 months since I had seen him and I was tired of living a double life I was about to call it quits. I would live in Michigan for a couple months and get close to him and his family and friends then leave to go home to start up my life in Houston again. Then I would get all settled enjoying my relationships with friends in Houston and then leave to live with him and his family again. Getting close to people and then leaving again was starting to wear on me emotionally. I was running my dad’s business in Houston and felt an obligation to stay. I also liked earning the big bucks. I just did not want to give all that up for a relationship. And he did not want to move to Houston. He has a teenage daughter still in high school. There just seemed to be no answer. In fact, I proposed breaking up on his visit to Houston last November. I almost sent him home on a plane before the visit was even over. It was a pretty tough visit.

Read related post:   A New Friend in Me: Finding Comfort in Being Alone

My current job at my dad’s business was managing art sales we had in hotels across the country in January. The company had not made any money for a couple years and after this last set of art sales we broke even again. I was getting paid well so the money I made would have been my dad’s profit this year. So basically my dad let me go after the art sales. I decided I would move to Michigan.

I packed it all up with my cat and dog and drove the whole kitten kaboodle to move in with my boyfriend. I guess you could say it was a happy ending. That’s where the movie would be over at this point and everyone would have good feelings. And it is good. We are happy together. We have a good set up here and get along great.

There is just the tiny element of me not having a job that pays enough to cover my expenses but that was highlighted in my other blogs. It’s a work in progress. I am teaching yoga and it is a beautiful opportunity. I am also selling Zeal for Life, an amazing superfood drink. I am hoping God has a plan for that too. I am taken care of for now and that’s what’s important.

Think happy thoughts :)! It all works out in the end.

To find out more about Zeal, check out www.malihah.zealforlife.com.