As someone who loves simple and minimal living, I realized that raising minimalist kids starts with me. It all started with a vision, that led me to refocus on gratitude.

And gratitude is contagious.

Keep reading to find out how I passed along my minimalist values to my beautiful family. 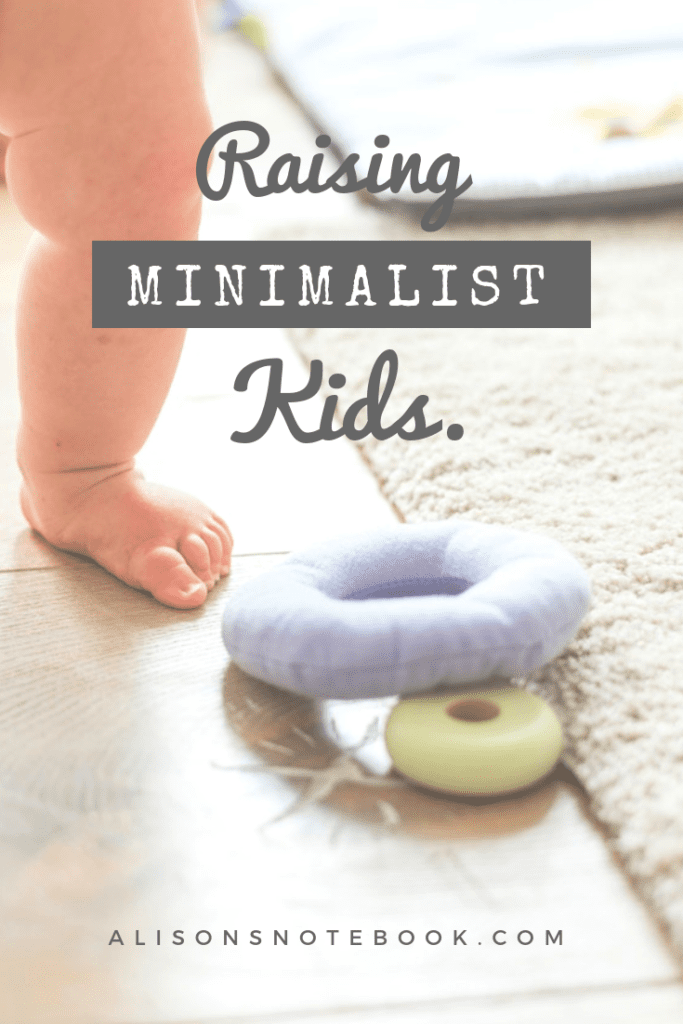 Vision for My Children

I have always been interested in raising minimalist kids. I saw this video that went viral years ago–you’ve probably seen it.

This kid opens up a gift and is obviously hiding disappointment as he expresses gratitude to his mom for the cutting board and knife that was just revealed. He lovingly says, “I can’t wait to cook you dinner with this, mom.” Then his parents reveal the real gift, a popular handheld gaming system. The child bursts into joyous tears. It makes me cry every time I see it.

After seeing that I said to myself “I want my kids to be that grateful for what they have.”

This unbeknownst to me was the beginning of a journey in raising minimalist kids.

At the core of raising minimalist kids is a bigger issue at hand: gratitude.

I can see how overwhelmed my five year old gets with too many gifts at once during the holidays. I experienced a big revelation one year when he received multiple gifts from family and friends. He opened his first gift and was so excited. He immediately began playing with his new super hero capes, but then felt pressured and ignored them when moving on for the next gift.

Read related post:   10 Decluttering Tips For Hoarders; Simple Yet Effective Guide To Stop Yourself From Hoarding

It’s really absurd when I revisit the memory.

If we want to focus on raising minimalist kids we have to allow them to be in the moment.

It wasn’t even about teaching him, because in that moment… That’s actually what he wanted and what the adults around him encouraged him away from. It makes me think that we are born knowing how to be in the moment and the older we get, the more we are pushed forward into the future or back into the past.

Minimalism Starts with Me

In our lives we have had to purge the mass amount of our belongings multiple times. In a later post I will talk more in depth about our road trip a few years ago in which we downgraded to a car full of belongings and traveled for six months.

That was the first time we got rid of almost everything at once.

And my son was completely fine with it. He had a backpack with some of his favorite toys, but even then he still spent most of his recreational time throwing rocks and playing with empty boxes.

The person who had the hardest time with raising a minimalist kid…was me.

Motherhood deepened my emotions. I had sentimental attachments to everything he had ever played with and at first was overwhelmed with sadness over the loss of an object that was attached with a memory.

The lesson is that raising minimalist kids starts with me and my ability to detach from objects and focus on being in the moment. Gratitude lives in the here and now.

Read related post:   What Is The Definition Of Minimalism (A Practical Guide)

Ready to try out minimal living for yourself?

For more information about minimal living, check out the minimalism challenge for a simple start.

We have started asking others to gift our kids experiences rather than toys or things. This year for Christmas my mother gifted us a membership to the Children’s Museum. We want to create memories and not just materialistic attachment to objects.

For my son’s third birthday we took him to a huge chain store. We prepared for letting him have anything he wanted. He repeatedly chose different toys. But unexpectedly, after a few minutes of sitting in the cart and fiddling with whatever he had he would say, “I’m done with this now.” And we returned it to the shelf.

He did this repeatedly and after over an hour of shopping we left the store empty handed with an ecstatic three year old who had the best birthday ever.