My dad passed away unexpectedly a few years ago, and this year it hit me hard. I’ve been learning how to deal with death, and wanted to share my experience.

I know this topic isn’t everyone’s cup of tea, but part of posting consistently every single week is that…sometimes I have to write about what is going on in my head.

This blog is an outlet for me—so thanks for letting me share.

When my dad passed away, I was attending weekly therapy sessions for a while. I found it extremely helpful, but its not always very affordable. BetterHelp is an affordable therapy option and takes place online. So, if you need help working through grief and you’re not sure where to start, then they might be a resource for you.

In-person therapy is really powerful, but I tried BetterHelp online therapy and gains some benefits as well.

Read my review of BetterHelp here. (I may receive a commission for purchases made through the links provided on this post at no cost to you.)

Additionally, if you’re interested in support but can’t afford any type of therapy, see what options might exist for free in your area.

I complied some examples of free or affordable therapy options here. 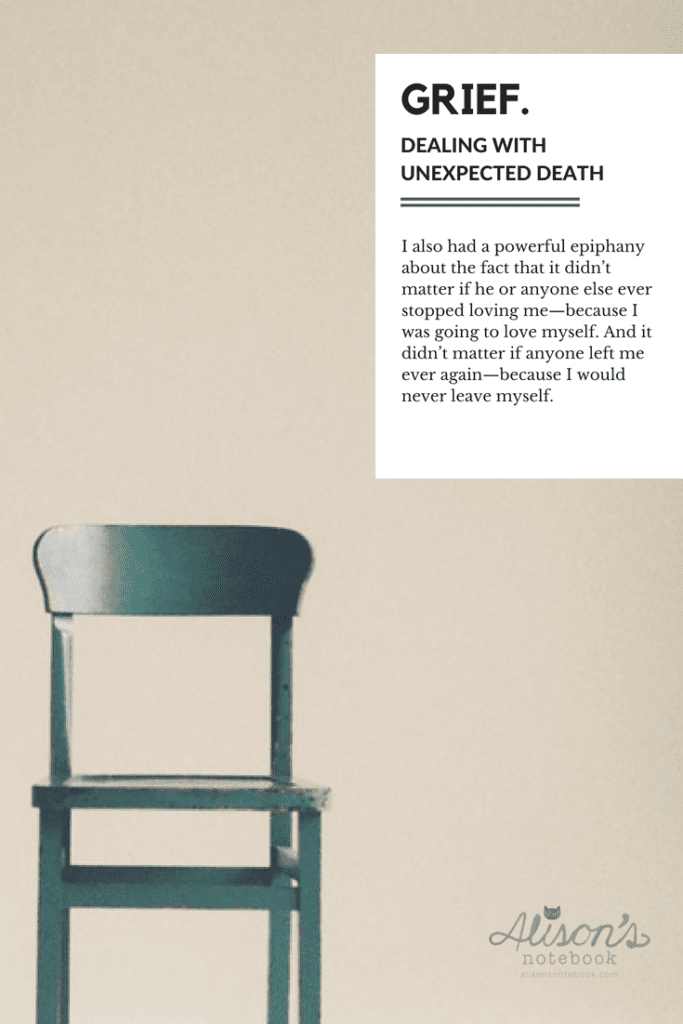 Backstory: Learning to Love Myself

Before my dad died and I needed to learn how to deal with death, I’d been through a lot of other experiences dealing with grief in general.

When I was 14, my dad left my mom. That is quite literally what happened, as he just packed a bag one day and said he was leaving. At the time, we were all very confused. On the outside, things seemed fine to me. But over time I learned that he’d struggled with alcohol abuse and depression and many years and while that wasn’t why he left, it definitely contributed to the internal change in him that made him want a change.

I empathize with him and what he was going through with 10 years of hindsight, but when I was 14 it was very traumatic and confusing.

Fast forward and somewhere around 10 years ago, I attended a pretty intense women’s conference where I had the opportunity to dive into a deep issue. My twin sister and I were estranged at the time, and I thought I’d be doing a lot of work around my relationship with her. But instead, I started getting all these feelings and anger towards my dad bubbling up. It was the first time I realized how angry I was at what he’d done, and the first time I expressed that anger.

Trying to Make Amends with my Dad

A few years after this conference is when I started going to therapy. and I had the realization that I’d wronged my dad (and others) by holding various resentments. I decided to try to make amends with my dad and try to repair our relationship. To be fair, the distance wasn’t one-sided. My dad was always distant with my sister and I, and I think he just didn’t know how to relate to us.

When I tried to apologize for my part, he wouldn’t hear it. He put his hand up, didn’t let me finish, and the conversation ended there.

That was…a bummer. But I also decided I could love him from a distance. I grieved the fact we may never be close and I accepted that things were what they were and it was ok.

My therapist asked me after all of this happened:

If your dad died today, is there anything you wish you’d said to him?

And after thinking about it, I confidently said “no”. I hadn’t learned how to deal with death yet, but I’d grieved the fantasy of what I thought out relationship could be, and I was at peace with that.

My dad and I had enough meaningful conversations that I felt like I knew him better than I ever had before. I wanted to be closer to him, but realized he wasn’t capable and accepted it. And I truly felt like we had both done our part to be our best to each other and practice self-care.

It wasn’t a year later that my dad had a severe heart attack while riding his motorcycle. They said that he was probably dead before he even hit the ground. And while that sounds traumatic, it also means that its likely he didn’t have time to suffer, and for that I’m grateful.

My dad’s church let my brother and sister and I fully determine how the service would go. My sister and I sang songs we’d written together, we each shared stories about him. It was really wonderful, and very sad.

But it was also a precious time to me. The time sent with my brother and sister planning his service, remembering how silly he could be, going through some of his things with my step mom. We all laughed, and cried.

I stopped going to church after he died (I finally gave myself permission), and found a new support system as well, and it became a really meaningful time of change in my life.

How to Deal with Death

One thing I’ve come to realize and appreciate about myself is that I often don’t have feelings in the moment. It’s like my emotions have a delayed reaction. So, it took me a long time to learn how to deal with death.

When I was 14 and my mom told me my dad was leaving, I almost laughed out loud. It sounded so absurd.

I didn’t grieve his leaving and the changes that happened aa a result for 10 years.

And I think when he passed away, I experienced the same thing. I had some sadness in the moment, but a lot of my sadness and grief has come in waves since then.

And this past weekend on father’s day, I experienced some of that delayed grief.

I’m honestly not entirely sure why. Maybe it’s because I’ve been through so many changes. Maybe its because this last year has been really hard.

But either way—here I am, letting myself feel.